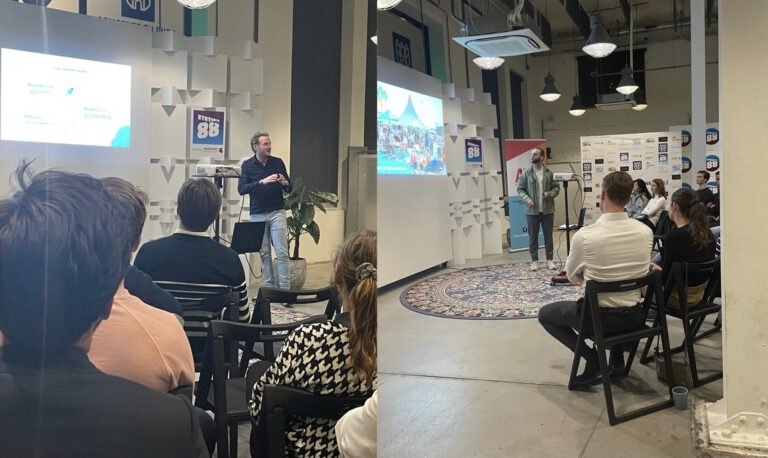 This Monday we, as the new board of Academic Business Club, had organized our first ABC-night. The evening started around 7:15, when the first enthusiastic students began arriving. We saw some similar faces and some new ones, but overall it was a great turnout. As the walk-in slowly started, our two speakers, Rob Bogaers and Tim Frenken also arrived. We started the evening off with Rob Boagaers, the founder of FindFactory. Rob had an inspiring story for us, it started with him being a professional hockey player during his studies and ended with him telling about what he considers his biggest success, his family. After Rob, came Tim Frenken from Beachy. Tim has had quite a rocky road the past 1,5 years and is currently still fighting for his entrepreneurial venture. Teaching us, that no matter how difficult things get, to never give up.

Rob started his business 12,5 years ago, a company specialized in online advertising. He noticed how his knowledge was pretty advanced for the time being. He wanted to explore this opportunity by starting for himself. He also explained that, though he’s doing pretty good now and has a clear aim, before that, he didn’t really know what he wanted to do. Rob, like the rest of us, was really trying to figure out what he wanted to do with his life. As he switched a few times during his studies, and realized that he wasn’t going to be on the hockey fields forever, he wandered for a while. Eventually, he figured it out, online marketing! After finishing his Bachelor in marketing, Rob began working at his first job in online marketing. During this time, which was around 2006, online marketing was a relatively new market. Rob became an expert at especially one thing, Google SEO and SEA (search engine optimizing and advertising). It was in 2011 when Rob started his own company, FindFactory. FindFactory is a digital agency for companies and brands with large ambitions. To this day Robs company is a big success and he also thanks his employees for that. He tells us that with a passionate team, you can get a maximum result. He’s very involved with his employees and always tries to train them to become better. In order to do so Rob says: ‘You have to start with yourself, in order to make others better’. But, at the end of the day Robs biggest success remains his family.

After a short 15-minute break, in which we had small talk with some of the students, we continued with Tim Frenken. Tim is considered the night-mayor of Tilburg, and we don’t disagree. Before he started Beachy, Tim was actually a DJ and already had quite a lot of experience in the field of entertainment.

It was 2019, when he first started Beachy: a city beach where you can have a bite, a drink and be entertained. He organizes different types of events like: movies, small festivals, a silent disco, you name it. However, when Tim first started out, the local government wasn’t immediately thrilled which made it more difficult to find a place to make Beachy. He then started out in front of the Schouwburg in Tilburg. Soon after, the local government noticed the success Beachy was getting and thought ‘well okay, maybe there’s something here’. And gave him a spot where he could stand permanently. But, then as we all noticed, Corona had arrived. Tim had to close for a while when the Dutch government told us all catering and entertainment industries had to close down. After a while he could open again; however there were lots of restrictions still and Tim had to be very creative to make it all work. A silent disco, to have entertainment without noice, then the entertainment wasn’t allowed either, so Tim got stuck again. As Tim continued his story, all I thought was ‘wow, he must be a very driven person to not let anything get in the way, and to keep on fighting’. He believed in his idea, he knew it was going to be a success, as it he’d noticed in the last few months, and he really wanted to go through with it.

Then, when Tim was done speaking, we all had a moment to have a drink and network with one another. The vibe in the room was great, we all got to know one another and everyone was very open to interaction. I took this as a chance to ask what the students’ first impression was of the ABC night. They were all very enthusiastic and liked the speakers a lot. The response I liked the most was ‘it’s so cool to hear these stories and it made me think, wow this could be me one day’. Because that’s exactly what the aim of ABC is: ’to inspire the next generation of entrepreneurs’.